Search our articles or browse by category below
Search

Building a unicycle wheel - a guide to the amateur

So  WHY Build a Unicycle Wheel?

This article aims to provide all the information you need to build your own wheels. There is also the question why would anyone want to? Is it only for geeks and mad men (or women, we do need to be PC here!)? When you buy a uni it has a wheel – they do not come in DIY form as a bundle of spokes and a rim and hub and if you want to upgrade a wheel then your uni supplier will sell you one. Beside all that your unicycle supplier or bicycle shops can build a wheel for you (and will probably offer tips if you get stuck).

So, without any more excuses, here is HOW to build a wheel… 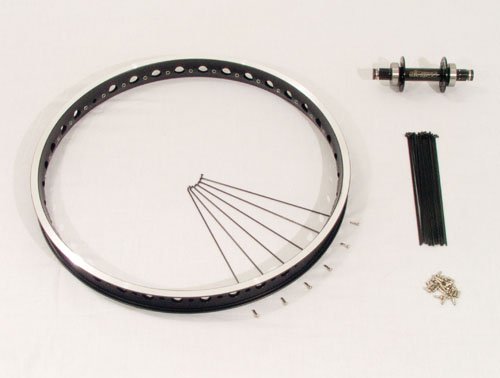 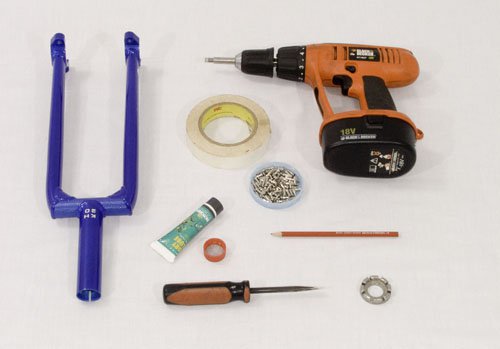 Rim; there are 36 (or 48) holes in the rim.  On unicycle rims they are normally offset slightly to one side or the other. There is also a larger hole in the rim for the valve. 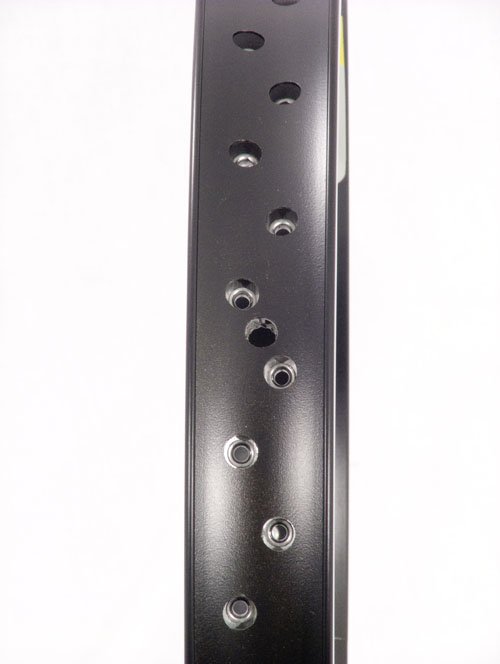 Hub; there are 36 holes in the hub, 18 per side.  Note that the holes are NOT opposite to each other, they are positioned alternatively on each flange as you rotate the rim.  This may seam obvious but remember this because this is where most people go wrong. 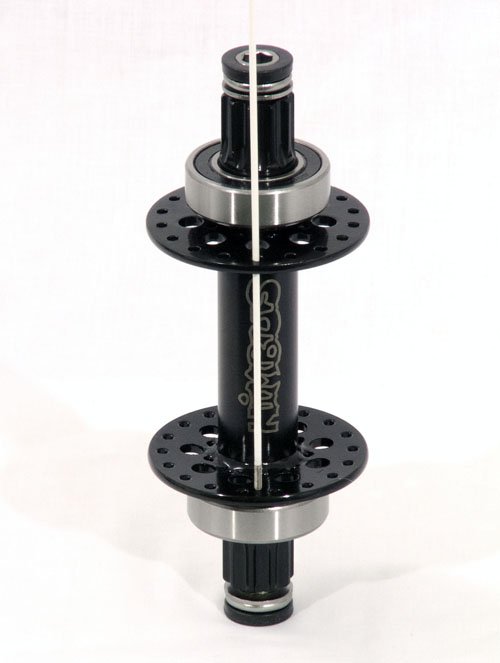 Spokes; these have a threaded end and a hooked end.  The threaded distance is always an exact distance (normally 10 or 11mm).  Be sure that they are the right thickness for the hub and rim.  14 gauge are the most common, 12 gauge is thicker. 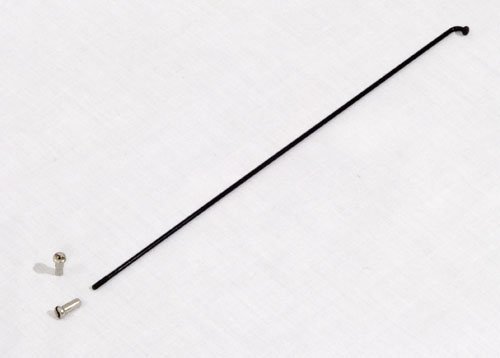 You should have selected your spokes using the spoke calculator, a unicycle specific one is here: It is not always possible to get the exact size of spoke that is specified in the calculator then go for one that is smaller, up to 2mm is not a problem.  Make a note of how close to the optimum the spoke is.  If it is exact, you will build the wheel to this position, if you are 2mm shorter, you will aim for this position.

Nipples; The nipple come in different lengths. For basic wheel building this does not matter, but if your spokes are a little bit short then longer nipples will help.

Sit down and lay out the components and tools within easy reach.

Place the rim between your knees with the valve hole at the top.

Take the hub and hold it in the middle of the rim so that with the writing in the centre of the hub so you can read it if you look through the valve hole.

This is where you want the hub to end up. (it may sound silly to be so pedantic but it helps with orientation if you know which way around the wheel is).

Lacing is the term used for the process of threading the spokes into the hub and rim.

You now need to guess which hole on the hub the spoke is going to go to.  The spoke will be going away from you; the nipple end of it will be closer to you than the hook end (this direction is called leading, if the spoke comes towards you it is called trailing).  With the hub held approximately in the middle using the spoke  you should be able to guess where it goes (this does not need to be accurate and is about 40 degree forward around the right hand flange of the hub). 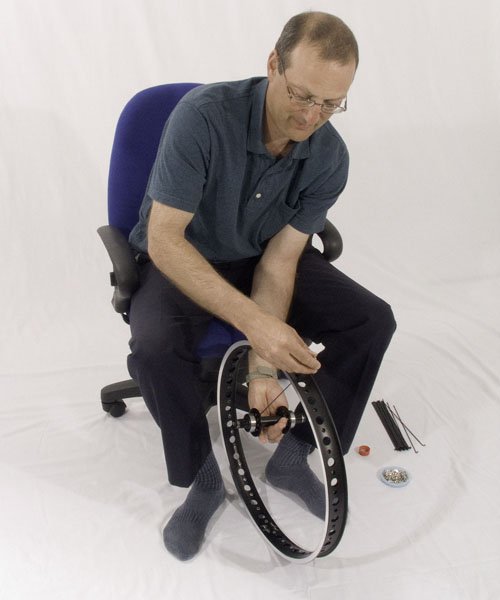 Second spoke etc. - Feed the spoke through the flange of the hub from the outside and feed it up to the hole in the rim.  Screw on the nipple, only put this on a couple of turns (you don't need tools for this).  Once the first spoke is in you can let go of the hub and let is hang on the single spoke.  Now take your second spoke; on the same flange of the hub thread it through the next but one hole further away from you.  Now feed the spoke through the 4th hole from your first spoke and put a nipple on it.  Repeat this process until you have all 8 spokes in.  Check that there is 3 empty holes in the rim next to each of the spokes you have fitted.

First spoke on the left hand side - Note: This is the point where most beginners go wrong with the wheel. So be sure to take your time.

You are going to put the spoke in that is between your first spoke and the valve hole.  Remember that this spoke is one spoke behind the first spoke.  Now twist the hub away from you and look where this new spoke is going to go.  It needs to go to the hole one back on the other flange.  This is sometimes not easy to tell especially on 36” hubs with their big spacing.  I push the spoke through the hole I think it is and then across to the other flange and then looking directly down at the hub you can see if it is one hole back or not.  Once you are sure that you have the spoke in the right hole then thread it through the rim and put the nipple on it. 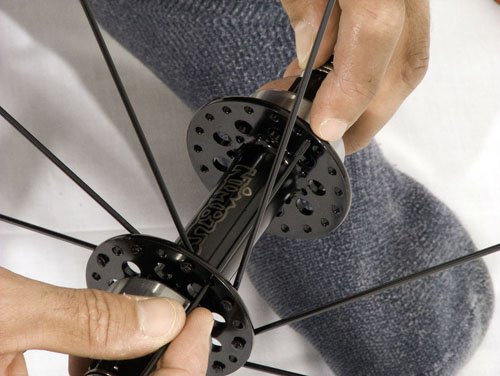 The first trailing spoke. - Take hub and rotate it away from you.  This is where having writing on the hub helps as a check, it will tell you if you have accidentally turned the wheel around.

Pick any hole in the hub and feed a spoke through from the inside this time.  Bring the spoke across the wheel in the opposite direction from the other spokes.  You now need to count the number of spokes that it crosses.  This is called the “cross” of a wheel.  Most 36 spoke  wheels are 3 cross, Airfoil rims are 4 cross and all 48 spoke wheels are 4 cross.  The spoke must pass on the outside of all but the last spoke that you need to feed it underneath.  Warning, be aware that spokes will scratch the rim! You may need to bend the spoke, do not worry about this, do it as little as gently as you can the bend will come out in the end.  I put my finger over then end of the spoke to protect the rim at this point as well.  The spoke then goes in to the hole that is 2 forward (or 2 behind) of the nearest spoke from that side.  Put the spoke on and tighten. 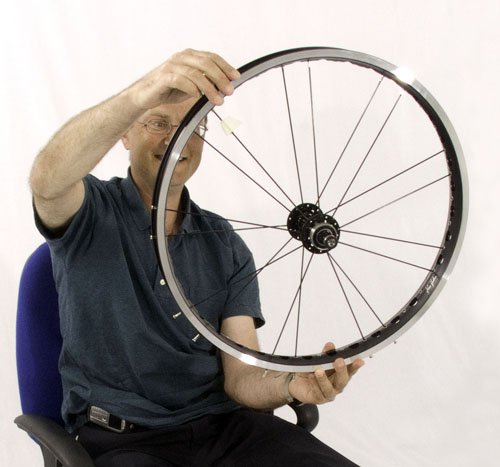 Spokes 21 to 36. - You now need to feed all the remaining spokes in, they should go in easily.  There is no need to any particular order; I like to do one side in full but is not necessary. 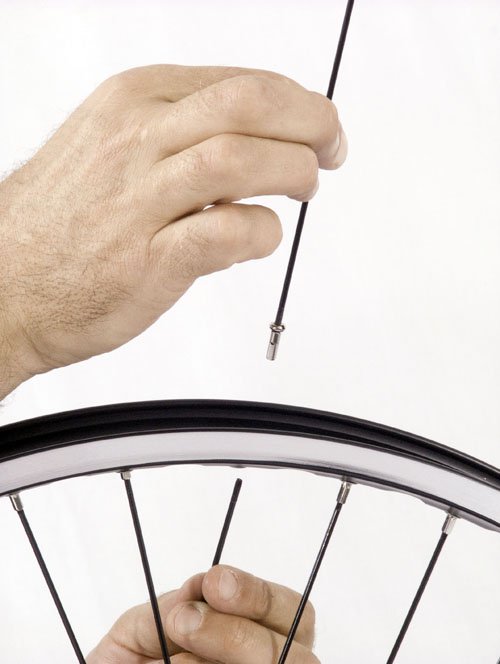 The next stage is to get the wheel built so that the spokes are all tightened to the same length.

This is where you need to remember where the length of your spokes is in relation to your nipples.  Starting at the valve hole you want to tighten all the spokes using your screwdriver to 3mm of this optimum length.  You do this by looking down the nipple from the top, good light is useful for this.

You can use an electric screwdriver or drill at this stage if you want but be careful if you so as not to over do it.

Now repeat the process taking them all to 1.5mm of the optimum.  Do not be tempted to take them all the way at this stage. 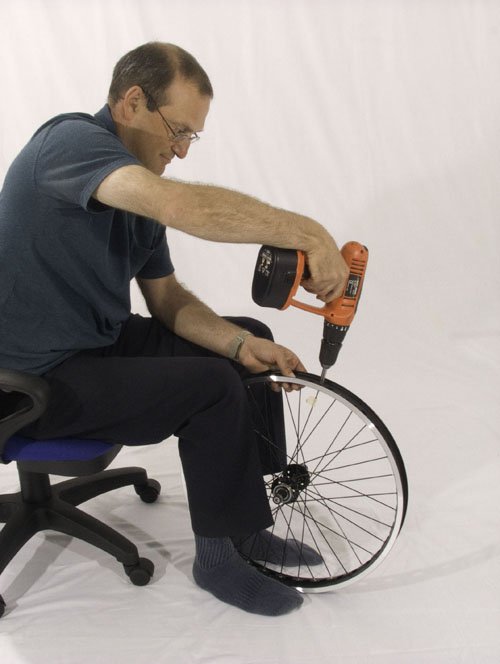 Repeat again taking them to the optimum length, but this is best done using your spoke key. 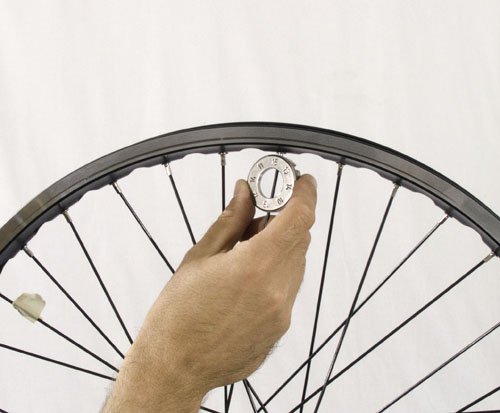 Once this is done, check it again. You need to have this reasonably accurate.

Tensioning to the same tension.

In theory the spokes should all be the same tension already, although due to discrepancies in rim or hub they are unlikely to be exactly right.  There are several ways to check the tension of a spoke.  You can:

Use a spoke tensioning gauge, this is easy and not available to most people.

You can feel the spoke by squeezing it against the next spoke and then wiggling it to determine if it is tight or slack.

Pluck it like a harp.  This will give a note, if it is high it is tight, if it is low it is slack'

I tend to use method 2 mostly, then check with 1 and 3 should I feel it necessary, it more than often shows that I have it right first time, but this comes with experience.

You should be using your spoke key at this stage to tighten or loosen the spokes to achieve the right tension.  Keep an eye on the mechanical build of the wheel all the time you are doing this, it will give you a good clue as to what is happening.

You may feel that the wheel needs more tension on it (unicycle wheels require quite high tension), if this is the case then you should add a half turn to each spoke (do not be tempted to do more than this at a time).

If you now need to settle the spokes in, if you don't your wheel will creak and go out of true very quickly. 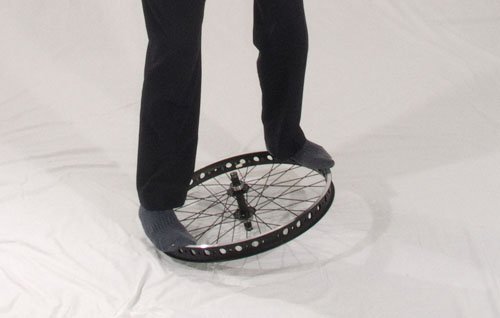 To do this you should place the wheel on the ground, do protect the rim and hub with cardboard or wood though.  Not step onto the rim with feet 180 degrees across from each other and jump gently on it.  You should hear the wheel creak, this is good. Rotate the wheel and repeat.  Now turn the wheel over and repeat until almost all the creaking has gone.

It is now worth just doing a final tension check to check nothing has changed dramatically.

Truing a wheel where you get the wheel straight and round. In theory after a mechanical built it should be true.  They never are though, it will be close but will need a little bit of tweaking. 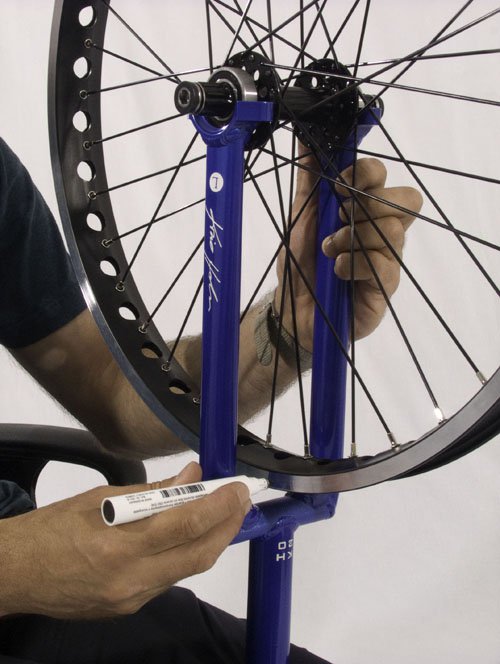 Place a frame upside down between your knees then place the wheel in the frame.  Now spin the wheel while holding the frame with one hand and your thumb gently touching the rim. You should be able to notice when the rim wobbles towards your thumb.  Stop it at one of these points.  You now need to pull the rim away from where your thumb touched it.  So tighten the spoke that goes away from it by half a turn and loosen the spoke on each side (these are going towards the thumb) by quarter of a turn.

The important thing here is to be patient, this may take several goes, do not rush it.  Once you have done one side repeat the same process on the other side.  You should easily be able to get down to 1mm movement.

Your wheel should now be ready for assembly. 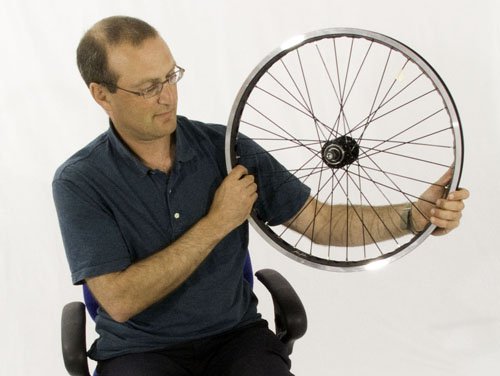